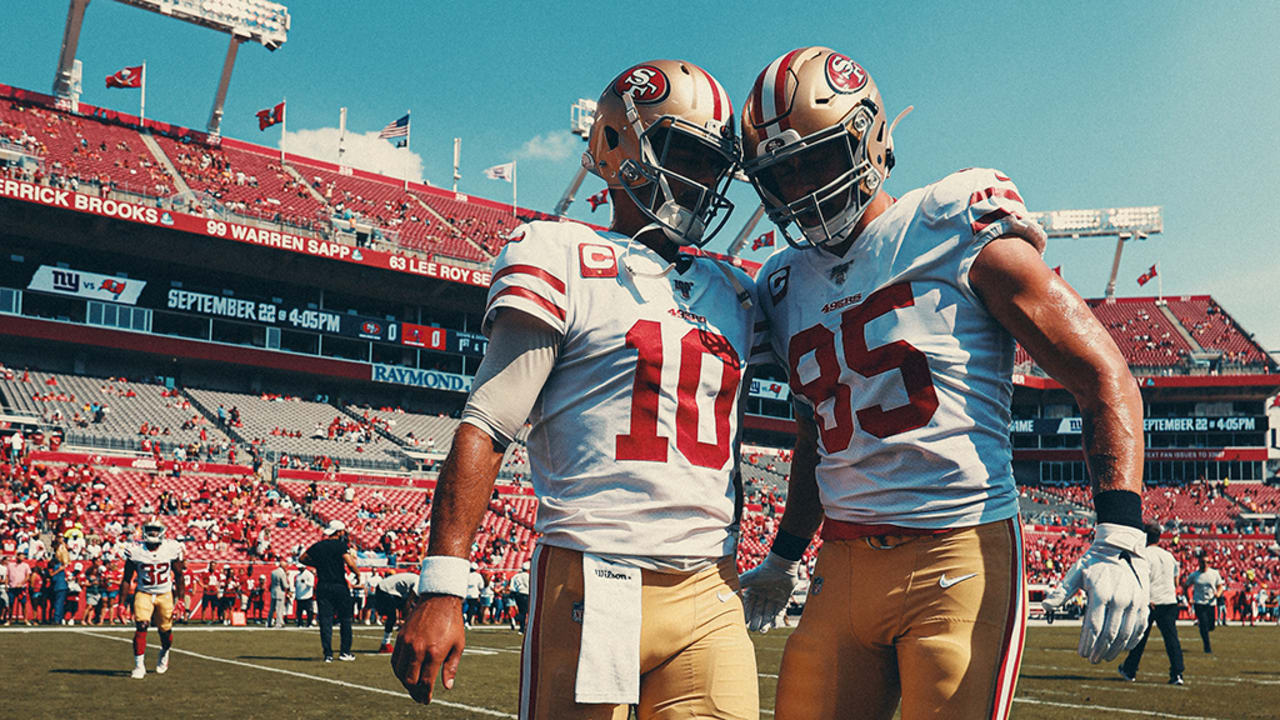 Every day appears to present a new rumor surrounding the San Francisco 49ers and their quarterback situation. On social media or trending on almost every sports talk show, the hype of offseason quarterback carousels continues to amuse media and sports fans alike.

Near the close of the 2020 season, 49ers head coach Kyle Shanahan doubled down on his faith in ﻿Jimmy Garoppolo﻿, saying he anticipates the seventh-year quarterback to remain in San Francisco heading into next season.

For the past year, San Francisco’s tight end has been numb to the ongoing “news.” ﻿George Kittle﻿ went on a virtual media tour on Tuesday, making a guest appearance on more than half a dozen popular sports talk shows, with every discussion circling back to the 49ers quarterback position.

During his recent string of appearances, Kittle, who is currently in Tennessee after spending the last few weeks off the grid amid the noise, backed his head coach, and quarterback, amid the recent “chatter.”

“Jimmy’s a hell of a quarterback,” Kittle said on Good Morning Football. “He took us to the Super Bowl last year. Unfortunately, some injuries prohibited us this year and I know prohibited him from performing at his best. I still believe in Jimmy. I think he’s an incredible quarterback. I think he can lead us to another Super Bowl. I think we can win the Super Bowl with him. I can’t even talk enough about his leadership skills on and off the field.”

Despite starting 30 games in his four seasons in San Francisco, Garoppolo has missed 23 contests due to injuries. Most recently, the quarterback struggled to remain on the field this season after dealing with multiple high-ankle sprains that forced him to miss 10 games in 2020.

On multiple occasions, Kittle emphasized the notion “availability is the best ability.” When Garoppolo is healthy, the quarterback boasts a 22-8 record as the starter (24-9 including the postseason). Without him, San Francisco is 7-27 dating back to 2017.

That record includes his first full season, which came a year removed from suffering a season-ending ACL injury, where Garoppolo in part led the 49ers to a 13-3 record en route to the team’s first Super Bowl appearance since 2011. With Garoppolo’s résumé and, optimistically, a clean bill of health, the tight end is confident San Francisco can return to the top of the NFC with their current signal-caller leading the charge.

“I’ll keep dying on that sword because I think Jimmy G’s a fantastic quarterback,” he added. “He’s got an amazing release. He’s got a great arm. He’s got great touch. So, I’m happy to have Jimmy G as my quarterback and I know that we can win with him.

“I definitely see Twitter likes to talk and, in my opinion, that’s about all it is – it’s talk and it’s chatter. The Niners aren’t in the playoffs this year so let’s look at the biggest headlines and what else is there to talk about except for our handsome quarterback Jimmy G, and I think that’s all everybody wants to talk about for some reason.”

George Kittle Shares His Stance on 49ers Future at…

Jamal Adams says he would ‘run through a brick…